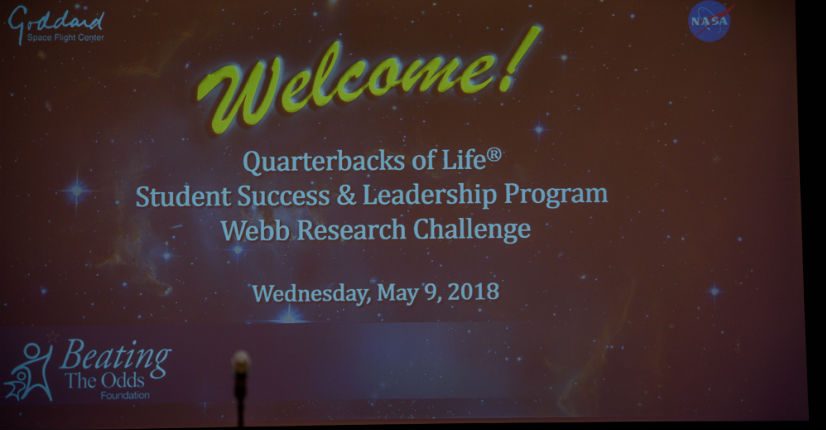 The Beating the Odds Foundation partnered with NASA for its annual event Wednesday, May 9, 2018 at Goddard Space Flight Center, Greenbelt, MD. This year’s research challenge focused on the James Webb Space Telescope.

Beating the Odds Foundation and NASA formed this partnership in 2013 because of similar goals and values. The focus of every challenge sponsored by NASA and the Beating the Odds Foundation is designed to introduce students to NASA; its wide range of career opportunities, many of which are STEM (science, technology, engineering, & math) focused; and to experience how NASA achieves success by studying a current mission challenge.

The day of event included a morning session where presenters from NASA spoke to the group followed by student presentations on the James Webb Telescope Research Challenge. George Morrow, Deputy Director, NASA’s Goddard Space Flight Center gave opening remarks. Dr. Eric Smith, Lead Webb Program Scientist, Chief Scientist, Science Mission Directorate Astrophysics Division at NASA Headquarters spoke to the students not only about his work on the James Webb Space Telescope, but also how he got to where he is in his career today. He went to elementary school in Altoona, PA, which was close to heart for many of the students in attendance. Dr. Smith related to the students by showing his career through the Five Stepping Stones to Success. He told the students they should aim really high with their goals just like NASA did with James Webb Space Telescope. The goals for Webb are very audacious. He told the students they will go on to do many incredible things but “it’s the people you’ll remember in the end.” At one point, there were 2,000 people around the world working on the James Webb Space Telescope. He told the students their plan may not be a direct one but the important thing to keep in mind is it’s ok if it’s not a straight line. He concluded by asking the students to make their future amazing.

Dr. Amber Straughn, Astrophysicist, Associated Director, Astrophysics Science Division and Deputy Project Scientist for Webb Science Communications at NASA’s Goddard Space Flight Center, told the students that she grew up in a tiny, rural town in Arkansas, and while she didn’t have many opportunities, the one thing she did have was the beautiful, dark sky to admire at night. She knew from the time she was a little girl that she wanted to study the universe. She told the students their dreams are never too big. She advised the students to find trailblazers in the field they want to go into. She said her story didn’t happen by accident, it took a lot of hard work and realistic goals. She said you can’t do it by yourself and told the students to seek out mentors who can help them. She explained to students the importance of being aware of their natural strengths and weaknesses, play on the strengths, work on the weaknesses, but focus mainly on the strengths. She told students that it’s a myth that scientists sit and work alone. She said the world’s best scientists work in teams to make their discoveries and that most successful people are really good at working in teams. She told the students that no matter what they like to do there is probably a role for them at NASA. NASA believes in diverse teams. While Dr. Straughn knew from the time she was a little girl what she wanted to do, she said it’s ok if you don’t know right away. She said find out what it is that you’re passionate about and do the extra stuff. Take the opportunities that come your way. It can become a stepping stone to the next thing. She told the students that failure is ok. We all fail. She said they don’t give up at NASA. They find ways to fix things. Dr. Straughn told a story of how she had to drop a chemistry class in college and went on to say that NASA builds failures into their programs. She concluded her inspirational message with “Keep looking forward and focus on the things that inspire you.”

After lunch, students had the unique opportunity to tour Goddard. Students made stops at the Hyperwall where they had the pleasure to listen to Dr. John Mather, Nobel Prize in Physics 2006. Students also got to meet and listen to people who control Hubble Space Telescope and learn about the tools that were needed to service Hubble and got to see the control rooms where mission operations staff manage Hubble’s daily operations and troubleshoot any problems that may arise. Students visited the Earth Observing System (EOS) Mission Control Center, where they saw where and how NASA Goddard Space Flight Center controls several Earth-observing satellites. Students also made a stop at the visitor center where Goddard’s innovative and exciting work in Earth science, astrophysics, heliophysics, planetary science, engineering, communications and technology development is demonstrated via numerous interactive and stationary exhibits and displays.